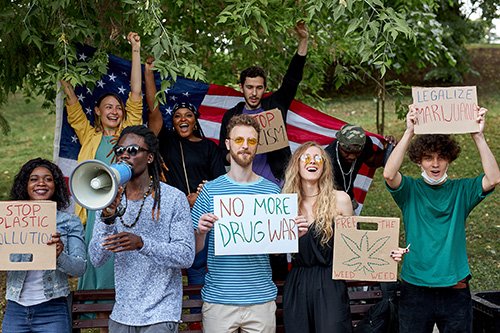 The war on drugs has been hard on cannabis and cannabis users, this was deliberate. One of the major harms, courtesy of the war on drugs, is best understood on behavioural economic terms. When there is a need to conceal goods to ship them safely, it becomes more lucrative to ship a more concentrated, but smaller amount of goods than to ship large quantities because more of your shipments will be more likely to make it past customs and law enforcement inspections. Think of trying to sneak a barrel of beer into a movie theatre as opposed to a bottle of vodka in your purse and you can begin to understand the problem facing drug smugglers. This was first noticed during prohibition when hard liquor began to replace beer and wine as a drink of choice in the USA.*[1]

The other side of this is if you make it illegal to sell a good but do not replace it with something equivalent, the market demand remains and creates a strong incentive for criminal organizations to fill the gap. Prohibition created the Mafia and the War on Drugs created the Cartels by handing them the American drug user market; about 53 million people as of 2021.*[2]

Background/Cannabis and War on Drugs

The war on drugs was built upon Harry Anglinger’s earlier Marijuana fuelled propaganda to crush the cannabis industry which threatened his friend’s timber-pulp and nylon investments.*[3] Anslinger was the original head of the FBN, the Federal Bureau of Narcotics, appointed n 1932*[4], which later incorporated other law enforcement departments to become the DEA; Drug Enforcement Agency.*[5] He was a little more transparent in his use of racist stereotypes in his propaganda than his successors and serves as a colourful example of the deeply racist nature of the drug war.

“The primary reason to outlaw marijuana is its effect on the degenerate races.” ~ Harry J. Anslinger*[6]

“Marihuana influences Negroes to look at white people in the eye, step on white men’s shadows and look at a white woman twice.” ~ Harry J. Anslinger*[8]

“There are 100,000 total marijuana smokers in the US, and most are Negroes, Hispanics, Filipinos and entertainers. Their Satanic music, jazz and swing, result from marijuana usage. This marijuana causes white women to seek sexual relations with Negroes, entertainers and any others.” ~ Harry J. Anslinger*[9]

“Colored students at the University of Minnesota partying with (white) female students, smoking [marijuana] and getting their sympathy with stories of racial persecution. Result: pregnancy.” ~ Harry J. Anslinger*[10]

“Marijuana is the most violence causing drug in the history of mankind. Most marijuana smokers are Negroes, Hispanics, Filipinos and entertainers.” ~ Harry J. Anslinger*[11]

Harry J. Anslinger was successful in having his 1937 Marijuana tax act passed.*[12] He continued to head the FBN/DEA until 1960, only retiring when he hit the mandatory retirement age of 70 under President Kennedy. His legacy continues through the War on Drugs he helped pave the path for.

The Federal Government has never been one to let a good crisis go to waste and capitalized on the War on Drugs to attack the left wing movements of the 1960s and 70s with draconian penalties. The drug wars policies were deliberately created to silence political opponents and ‘uppity’ minorities.

“You understand what I’m saying? We knew we couldn’t make it illegal to be either against the war or black, but by getting the public to associate the hippies with marijuana and blacks with heroin. And then criminalizing both heavily, we could disrupt those communities,”…“We could arrest their leaders. raid their homes, break up their meetings, and vilify them night after night on the evening news. Did we know we were lying about the drugs? Of course we did.” —former Nixon domestic policy chief John Ehrlichman*[13]

Bill Clinton famously admitted to smoking Cannabis in the UK*[14], a crime which by 2018, 700,000 citizens per year would be imprisoned for with laws he helped create and pass.*[15] In 2018 Cannabis arrests still made up 43% of American drug arrests.*[16]  He along with now President Biden were major architects of the drug war in the 1980s and 90s, getting the Violent Crime Control and Law Enforcement Act passed in 1994, which Clinton later apologized for but Biden never did.*[17] Biden helped write the crack disparity laws that saw African American’s targeted for crack possession and jailed at rates 100x greater than a white person caught with an equivalent amount of cocaine in his Anti-Drug Abuse Act of 1986.*[18] This, along with stop and frisk and other racist legislation has resulted in nearly 1/3rd of African American men being incarcerated during their lives.*[19]  First Nations/Native American’s are the only demographic targeted more heavily by the War on Drugs than African American’s and have an even higher rate of incarceration in the USA but have less advocates speaking on their behalf.*[20]

Obama admitted to using marijuana and cocaine while making a token gesture of reducing, but continuing the immoral crack sentencing disparities over cocaine arrests. Reducing it from 100:1 to 18:1 was a token gesture and left poorer, generally black and First Nations/Native American users stuck with 18x the penalty of, generally white, cocaine users.*[21]

In case if it seems like I’m picking on the polite but corrupt Democrats, the rude but corrupt Republican’s were hardly any better. George W. Bush similarity increased funding for law enforcement but not services for disenfranchised communities or addicts. He allocated over 70% of the related budget to law enforcement.*[22] Donald J. Trump simply scapegoated Mexican’s using the same arguments: “The fact is, since then, many killings,murders, crime, drugs pouring across the border, are money going out and the drugs coming in. And I said we need to build a wall, and it has to be built quickly.”— Donald Trump *[23] Naturally, while scapegoating Mexican’s for bringing methamphetamine across the border he was claimed to be snorting adderall*[24], a combination of Amphetamine and Dextroamphetamine and the white-collar version of the heavily stigmatized methamphetamine. Which brought us full circle back to President Biden.

For Noids, Synthetic Cannabinoids, the war on drugs has just started to begin targeting them in the last couple decades. So far this stigma has resulted in the banning of first hemp/cannabis, then the earlier and generally safer noids like the JWH series. Noids themselves carry a more significant risk than cannabis, though this risk can be controlled by using high quality product with a known dose and by avoiding re-dosing. Buy using a quality product you avoid contaminants and mislabelled drugs, quality should be guaranteed by using a drug testing kit when available. By using a known dose you prevent an accidental overdose or from experiencing the more intense and unpleasant side effects of higher doses.

Noids were first discovered in 1940 as part of an exploration of novel terpenes (plant oils like essential oils) at the University of Manchester and Illinois.*[25] Eli Lily discovered Nabilone in the 1977 and it was the first noid marketed for human consumption.*[26] In the 80s the CP series, named for Charles Pfizer of the well known Pharmaceutical brand, and the HU series named after the Hebrew University of Jerusalem where they were discovered.*[27]*[28]

By 2011 the DEA was successful in their bid to have JWH-18 and 4 other novel cannabinoids banned*[32], resulting in 2015 having the highest number of synthetic cannabis related calls in American history at almost 8000 reports.*[33] Once again taking advantage of a crisis the DEA doubled down on prohibition and ad 84 new cannabinoids banned;*[34] this didn’t dampen the market however and almost 4% of Grade 12 students*[35] continue to use these relatively rare compounds the DEA has now helped popularize.

When it comes to the names of the novel cannabinoids they are often misnamed in common use and there has been an effort to create a standardized way of naming the compounds. Novel cannabinoid names can get pretty complicated so I’ve included a quick guide to the most standardized naming convention I could find. Not all compounds have been named according to this formula but most do have a chemical name associated with it which could be considered more correct/accurate than it’s common name. Many of the names are shortened when these compounds are discussed online and sometimes even in scientific literature.

Cannabinoid molecule is split into three portions: head, core and tail. Naming conventions should ideally follow this trend to make distinguishing between the various cannabinoids much easier, though with no regulation in place this is unlikely to occur soon.

Without further ado, I present to you my compilation of over 120 synthetic cannabinoids (including the JWH series  mentioned previously in the article). In future articles I intend to expand and discuss the differences between each of the chemicals as well as classes of cannabinoids such as the indoles, indazoles, and others.